Take a photo that captures your research.

Enter the 2021 Graduate Research Photo Competition to win a cash award, the opportunity and prestige of having your photo displayed at the Graduate Student Commons in the Valley Library and Heckart lodge, and bragging rights!

This contest is open to all currently enrolled Oregon State University master’s or doctoral graduate students in both thesis and course-based programs. 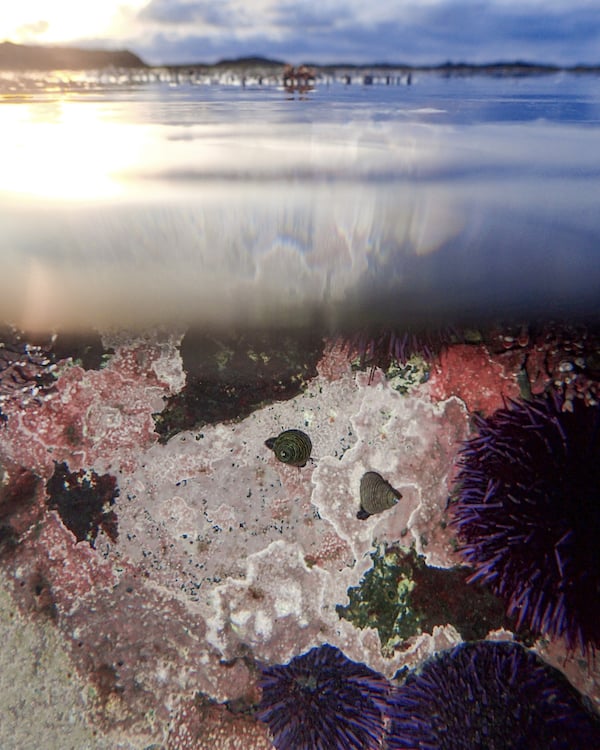 Most people looking into a tide pool see the sea urchins, the snails, the fish... But what about those bright pink crusts? Those are coralline red algae, of no relation to corals, but of great importance to marine communities. Found from polar kelp forests to tropical coral reefs, coralline algae provide food and habitat for many species, including corals and sea urchins. However, this isn’t their only role. Coralline algae also release a chemical cue that induces the larvae of many invertebrates to settle from their free-floating planktonic stage to their crawling adult form. Along Oregon’s coast, chitons, abalone, sea urchins, and limpets all rely on coralline algae in one or more ways. As our ocean warms and becomes more acidic, coralline algae are likely to decline, possibly up to 90%, due to the increasing stress of these conditions. One of the reasons these algae have been so successful is their calcium carbonate skeleton that protects them from grazers, waves, and tumbling rocks. Unfortunately, this calcium carbonate structure also makes them very susceptible to ocean acidification, as the process to secrete calcium carbonate becomes increasingly energetically expensive. This negative affect on coralline algae will likely have cascading effects through the organisms that rely on them for food, habitat, and settlement cues. In coral reefs, ocean acidification led to a significant decrease in successful coral settlement to coralline algae, and we may see a similar effect in colder waters as the settlement cue is affected and coralline populations decline. 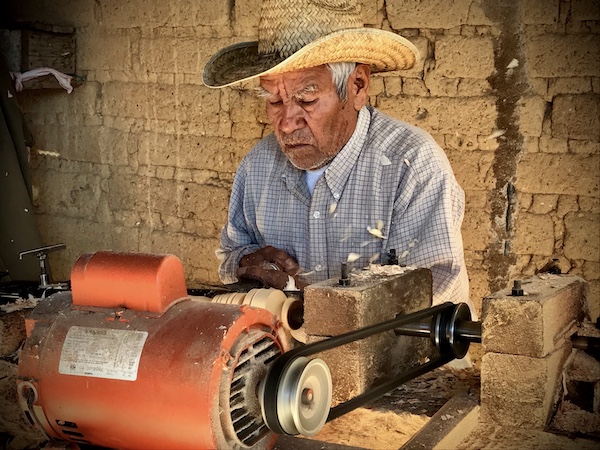 While conducting interviews in the Mexican state of Oaxaca, my colleague and I followed a mechanical humming to a small adobe workshop perched on a forested hilltop in the neighborhood of “Las Ánimas”. The workshop’s sole occupant was narrowly focused on his profession of over 50 years: crafting wooden whisks called “molinillos”. In an interview conducted over the sound of the whirring motor, we were told the molinillo maker was one of many residents whose livelihood was inextricably linked to the community-owned and managed forests we studied. At the end of the interview, I purchased a molinillo and thanked its creator, looking forward to the many cups of frothed hot chocolate the wooden tool would make. “Do you know what Las Ánimas means?” my colleague asked me as we walked away through the dappled shade of the pines. I shook my head, the buzz of the workshop fading in the distance. “It means ‘the souls’”, he said. Fitting, I thought, for the people who made the forests where I conducted my fieldwork feel so alive.

Columbia torrent salamander (Rhyacotriton kezeri) perched on a mossy streamside log looks out over his domain, facing an uncertain future. This species of salamander is only found in the Pacific Northwest, where it inhabits cold, fast-flowing headwater streams. Habitat loss and climate change are threatening the survival of this species, and this photograph was taken during surveys gathering information to assist with the decision to place it on the United States Endangered Species list. Don’t let its small size deceive you, this species plays an important role in the ecosystem it inhabits! This amphibian is active both in the streams and riparian forest, making it an important link in the flow of nutrients between the two habitats. Many of the streams that they live in are fishless, and as a result salamanders are the ecologically dominant vertebrates in these streams. By consuming insects and arthropods, salamanders can have large impacts on the macroinvertebrate community. Many of the animals that they eat feed on leaf litter and other organic matter that stores carbon which would otherwise escape into the atmosphere, contributing to global warming. Less salamanders means more macroinvertebrates and less organic matter, and that could have a strong effect on climate change. My research seeks to discover the ecological role that salamanders have on their ecosystem in Pacific Northwest forests. By giving tangible ecological values to these amphibians, we can better understand what the forests would be like without them, and how the rippling effects would change our world.

How can I apply?

Graduate Students can submit a maximum of one photo per competition year. In addition to your photo submission, please provide the following information through the online submission form.

The abstract must explain your photo to a general audience outside of your field of study!

Selected entries will have the abstract printed and displayed with the photo.

To be considered in the competition, all submissions must be:

Note: The Graduate School is required to report all awards to the Office of Financial Aid. This may cause your financial aid award to be revised.

Top finalists will be chosen by the judges two weeks prior to the award ceremony on April 26. The winners will be announced during Grad Appreciation Week.

The judging committee will utilize this rubric when selecting the top finalists. Please be aware that by submitting a photo, you agree that the Graduate School and the Valley Library has permission to print your photo if chosen for display in Heckart Lodge or The Graduate Student Commons.