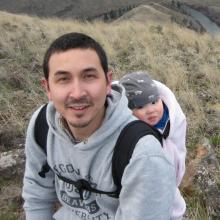 As a researcher for the Yakama Nation Fisheries, Ralph Lampman studies lampreys, a prehistoric, eel-like fish that looks scary, but is important to Native American culture and regional ecosystems.

Lampreys are a traditional food in Yakama, Nez Perce and Umatilla cultures, and while they’ve survived at least four mass extinction events, dams, pollution, habitat loss, dwindling host fish and other factors have decimated the population of Pacific lampreys. Through his work with the Yakama Nation Fisheries, Ralph hopes to develop strategies for increasing their numbers, both in the Pacific Northwest and eventually Japan.

While his research focuses on a species that’s 450 million years old, Ralph says his graduate experience at Oregon State also prepared him for the sometimes difficult task of managing people.

“Tribes, different agencies, differing viewpoints — it can be hard to get a relationship satisfying for everyone,” Ralph says. “Guidance from my professors and my time spent on river were very helpful. Forging a relationship with my advisor, navigating lab dynamics and collaborating with my cohort during my graduate studies helped prepare me for some of the challenges I face.” In the final year of Ralph’s program, several obstacles — as well as the birth of his son — created significant financial pressure. To help overcome those obstacles, the Graduate School gave him the Delson Bridge to the Future Fund Award, a grant specifically intended for students in the final phase of their graduate education. “It helped me cover research expenses and other costs without which I would not have completed my thesis,” he says.

That thesis project — Pacific lamprey radio telemetry in the North Umpqua River — led directly to his “dream-come-true job” with the Yakama Nation.