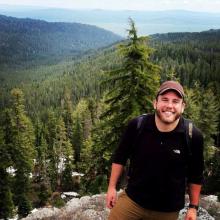 Conversations around global climate change range from acerbic to chilling. Jeremy Hoffman is contributing scientific rigor to the conversation by researching the way Earth’s climate has changed in the distant past.

In its natural state, the Earth regulates CO2 levels, even though this does not prevent temperature changes, even drastic ones. For example, air temperatures above the Greenland ice sheet have swung up to 12 degrees Celsius in less than 40 years. This phenomenon, known as a Dansgaard-Oeschger event, has happened periodically throughout the Earth’s history without human intervention.

Still, the impact of human civilization — 30 billion tons of CO2 annually — is staggering. “It’s been three million years since there was this amount of CO2 in our atmosphere,” Jeremy says. “We know what happened then, so we have a pretty good idea of what to expect in the future.” Temperature change, even by only a few degrees, has massive implications for life on Earth.

Receiving the Provost’s Distinguished Research Fellowship played a significant role in Jeremy’s decision to attend Oregon State. After his first year, Jeremy received a three-year National Science Foundation (NSF) Graduate Research Fellowship. “I can’t describe how it felt to receive that kind of support,” he says. “The Provost Fellowship helped set the stage for receiving my NSF fellowship. To look on the NSF website and see your name next to students from Harvard? That’s pretty great.”

To learn more, check out Paleo Climate Research at OSU